Chennai:Never having been hospitalised in the 25 years of her life, Komal Dhiraj Godase was shocked when she was diagnosed with Primary Pulmonary Hypertension (PPH) - after suffering from bouts of vomiting – in the beginning of September last year. 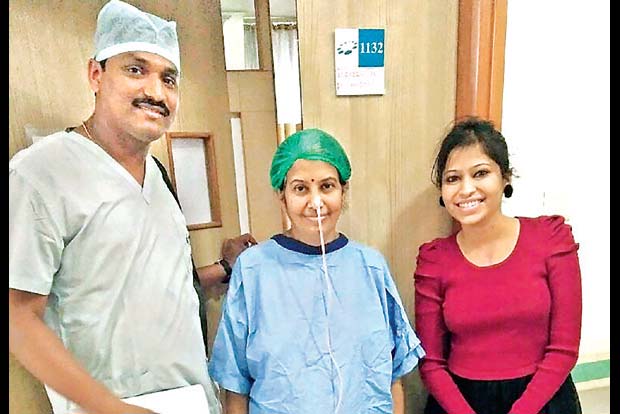 Finally diagnosed with a failure of the heart and lungs, the then newly married Komal – who is a professor at an Engineering college in Maharashtra - and her family were prepared for the worst. However, unwilling to give up, Komal and her husband searched for other options and learnt of the possibility of a bilateral lung and heart transplant in a Chennai hospital. She flew down to the city, underwent the transplant and has recovered completely.

Speaking to DTNext, she recalled the trauma when she received the news of her illness. “It was extremely depressing. The doctors who had treated me in Maharashtra said that there was no hope as there was no treatment available for my ailment. I was on medication, but told that there was no hope,” she said, adding, “I was sent back home where I was on oxygen support. After a lot of research, we got to know that there is the option of organ transplant.”

With knowledge on the availability of a transplant, she approached a hospital in Bengaluru, where it was suggested she try Chennai – which is the leading city for organ transplants. “I was under severe depression owing to my health condition and all the doctors had told me I did not have much time to live. While my family was prepared for whatever was to come, it was an extremely rough patch for my husband and I. We had just started on our married life,” she stated.

After considering a few hospitals in Chennai, they narrowed it down to Gleneagles Global Hospital, which agreed to treat her. “The team of doctors, led by Dr Sandip Attawar, planned to conduct a transplant of the lungs, but owing to the fact that I had a failed heart, it was deemed risky. They tried to improve the condition of my heart by administering medication through injections for three days, but my condition worsened. Eventually, following discussions, they eventually decided to perform a bilateral lung and heart transplant,” she said, recalling the trauma.

Following a number of counselling sessions, she underwent the transplant earlier this year. “Since the surgery, I have recovered completely. I have been able to go about life with no restrictions. In fact, the doctor had advised me to go paragliding, which I did in Goa last month. It was a wonderful experience. I have also gone valley crossing at Sahyadri Hills since,” she added.

While her experiences have been quite challenging, she is using the opportunity to deliver motivational speeches at educational institutions and has also been a source of inspiration for many patients who are in need of transplants.

Alzheimer's steadily on the rise in hyderabad city

15% increase in Jaundice cases in Hyderabad

Near-fatal accident victims back on foot, thanks to Aware