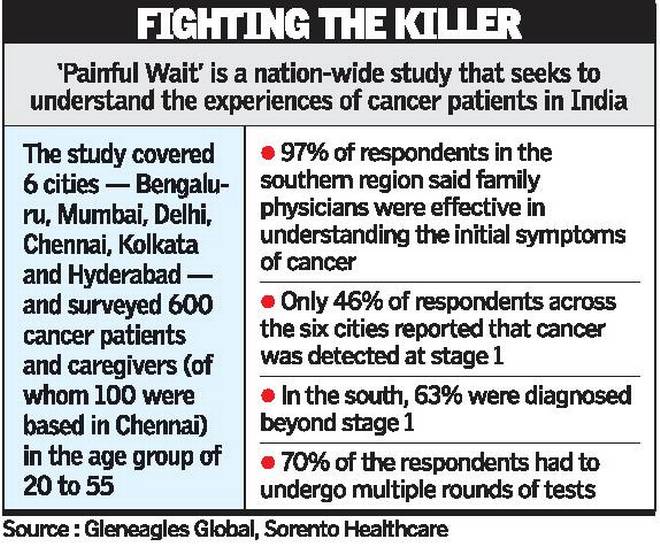 Cancer patients often have to undergo multiple tests and have poor access to oncologists, losing time in treatment initiation, according to a study conducted on understanding the journey of cancer patients.

The findings of ‘Painful Wait’, a national cancer study, was released at Gleneagles Global Hospitals, Perumbakkam, on Saturday to mark World Cancer Day. Commissioned by the hospital along with Sorento Health, the study covered six cities, including Bengaluru, Chennai and Delhi and 600 cancer patients and care givers between 20 and 55 years. Nearly 70 % of the respondents had to undergo several tests on visiting different oncologists and this often caused a delay in treatment. In the southern region, including Chennai, only 58 per cent received a confirmed diagnosis within three months. On an average, patients visited at least two doctors before starting the treatment. Some of the concerns revealed in the study were timely access to healthcare facilities, lack of counselling and cost of treatment.

Pointing out that nearly 80,000 new cancer patients were diagnosed every year in the State, Raja Sundaram, Director, Gleneagles Global Institute of Oncology, Gleneagles Global Health City, said the study revealed the painful journey of cancer patients from the initial symptom recognition and diagnosis to treatment. Patients had to undergo a waiting period at every stage. Many of them lost three to six months before the initiation of treatment, he noted. The need of the hour was to provide comprehensive care under one roof to reduce delays, he added.

Referring to the inauguration of ‘Unwait zone’, Ramesh Krishnan, Chief Executive Officer, India Operations Division, Parkway Pantai Limited, said the initiative aimed at addressing non-clinical patient care and providing a conducive atmosphere for patients and care givers. The zone has facilities such as a book corner and music jukebox for the patients to use in the oncology wing.

‘Miscalculation’, a short film on cancer awareness, was screened on the occasion.

Alzheimer's steadily on the rise in hyderabad city

15% increase in Jaundice cases in Hyderabad

Near-fatal accident victims back on foot, thanks to Aware