PATIENT EXPERIENCE MATTERS TO US THE MOST

Every year, we strive to make life-transforming impact in the lives of patients with severe conditions & disorders. Hear our Patients share their experience at Gleneagles Global Hospitals. We hope it inspires you as much as it inspires us!

Mr. Hassan, an Iraqi citizen had been suffering with esophageal motility disorder for over two and half years. This resulted in severe digestive problems; he had a lot of difficulty in swallowing. Although he had travelled far & wide for treatment, he found success at BGS Gleneagles Global Hospitals Bangalore. The team of doctors at the hospital conducted various tests and diagnosed that Mr. Hassan had a condition called diffused esophageal spasm. They undertook a successful procedure to relieve him of the difficulties and he has now made complete recovery. 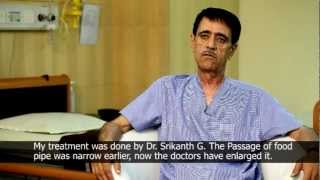